This extremely strong performance comes minutes after prominent crypto analysts called for a strong breakout as the asset neared $250.

$250 has been a pivotal resistance for Ethereum over the past few years, acting as a range high on multiple occasions. The fact that the asset surged past it with such strength is convincing bulls that a big bull run is imminent.

One trader shared the chart below in the wake of the move, writing that he still thinks the asset will trend higher towards 2019’s $350 highs. This trader was one who called in March and April to buy the cryptocurrency, writing how the technical and fundamental case for ETH was bullish. 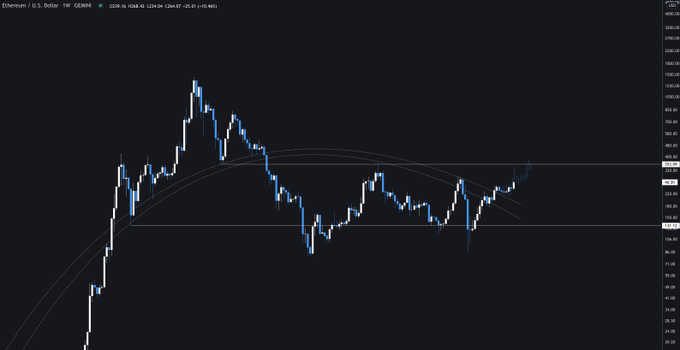 This marks one of the largest liquidation events for the cryptocurrency seemingly since March’s capitulation.

While Ethereum’s price action has stalled, analysts think that fundamentals could drive the asset even higher in the months and years to come.

As reported by NewsBTC previously, Mythos Capital founder Ryan Sean Adams said that Ethereum at $243 is “hilarious.” This was in reference to his sentiment that the introduction of staking and the adoption of DeFi will drive up demand for the leading altcoin.

Aave (LEND) Parabola Breaks, Could An Over 80% Correction Follow?

Ethereum at $243 Is “Hilarious,” Says Analyst as ETH2 and Staking Near

Ethereum at $243 Is “Hilarious,” Says Analyst as ETH2 and Staking Near