Chainlink (LINK) has been one of the top-performing crypto-assets after its crash early last week. The coin is up 5% in the past 24 hours alone, outpacing Bitcoin’s 0% performance and Ethereum’s -1% performance.

LINK may have room to move even higher coming days as the technicals of the cryptocurrency remain in a bullish state.

Chainlink is primed to move higher despite stagnation in the price of Bitcoin and Ethereum, the two market leaders.

One crypto-asset analyst shared the chart below on September 26th. It shows that on a weekly scale, LINK remains in a positive position as it forms two crucial signs of a bullish trend: a hammer candle on the weekly chart and the weekly RSI flipping the midline into a level of support:

“This one is definitely not done here. In fact, I think we’re just getting started again. 1. Weekly candle shows a MASSIVE hammer candle (indicates reversal). 2. Weekly RSI flipped the midline to support. Solid,” the trader said in reference to the chart seen below. 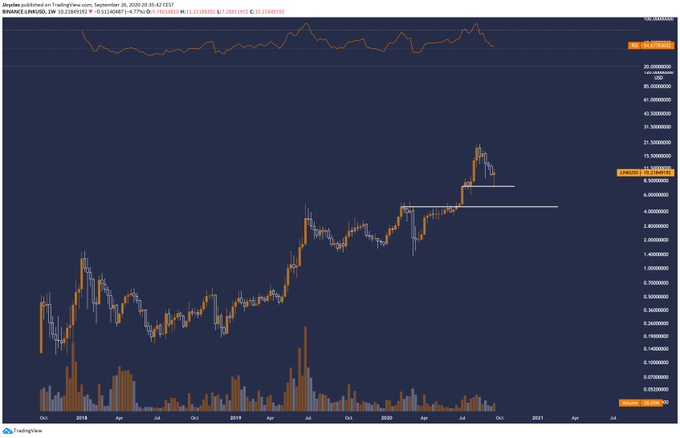 Another analyst echoed this but drew attention to the asset’s short-term prospects.

The charts he shared indicate that Chainlink just invalidated a short-term bear pattern. This invalidation came as LINK has continued its ascent to the upside, recently holding $10 and continuing higher.

Related Reading: Critical On-Chain Signal Predicts That Bitcoin’s Next Move Will Be Upward

Could Lead to a DeFi Rally

Kelvin Koh, a partner at The Spartan Group, said in late August that it may be that LINK and BAND actually precede price action in the rest of the DeFi market:

“Oracles led the previous leg of DeFi rally on the way up and then on the way down. If today’s move in $LINK and $BAND is any indication, the next rally for the broader DeFi space should follow.”

Oracles led the previous leg of DeFi rally on the way up and then on the way down. If today’s move in $LINK and $BAND is any indication, the next rally for the broader DeFi space should follow.

This was the case earlier this year when Chainlink  and BAND saw strong moves higher despite weakness in the rest of the market.