Even taking Bitcoin’s Monday pump from $9,000 to $9,400 into account, the cryptocurrency is still in a macro consolidation.

Some traders have joked that considering the length of BTC’s consolidation already, it could go on for months longer. One trader, in fact, postulated that it may be until late-Q3 or Q4 of this year until the crypto market establishes a macro trend.

An analyst, however, has observed that Bitcoin is at the apex of a multi-month triangle pattern. And fortunately for bulls, analysts say that buyers are in control.

Bitcoin’s price performance over the past two months has undoubtedly been boring. With BTC registering a series of higher lows and lower highs, the cryptocurrency is clearly at an impasse.

The chart below shared by a cryptocurrency trader on July 7th depicts Bitcoin’s indecision rather well. Per the chart, BTC is trading in a two-month-long symmetrical triangle, with the asset centering around $9,300.

What’s important about the triangle is that Bitcoin has reached its apex, indicating an imminent breakout. 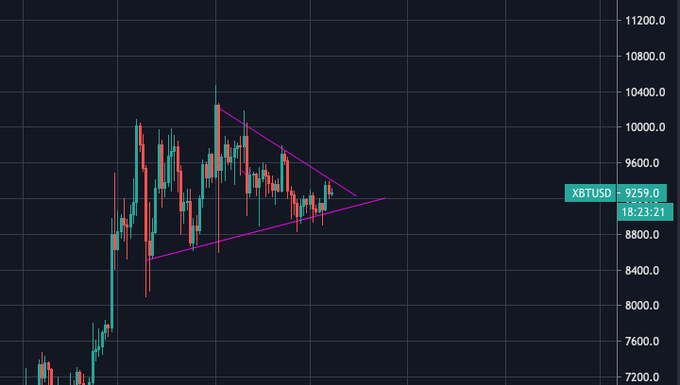 Volatility indicators suggest that this breakout will be of macro importance.

As reported by NewsBTC, Bitcoin’s realized volatility (historical volatility index) recently reached lows not seen since March/April of 2019. Volatility is also slightly above the lows of November 2018, prior to a 50% crash that took Bitcoin from ~$6,400 to $3,200.

With a massive Bitcoin breakout coming, investors may be wondering which way the technicals lean.

An analyst shared the chart below last week, showing that if Bitcoin tops here, it will be like nothing seen in the past two years. Each of BTC’s tops over the past two years has been marked by a positive BitMEX funding rate.

At current, the BitMEX funding rate is running neutral to negative, boding well for bulls.

Corroborating the expectations of upside is the three-day stochastic RSI. An analyst observed that the indicator is undergoing a textbook bullish crossover, last seen in March after BTC hit $3,700.

On the off chance that Bitcoin doesn’t break higher from this triangle, analysts think it’s wise to accumulate anyway.

Matt D’Souza, the CEO of Blockware Mining, remarked on the importance of accumulation:

Many cryptocurrency proponents agree. If one is certain that BTC appreciates exponentially, worrying about a few percentage points here and there may be unnecessary.